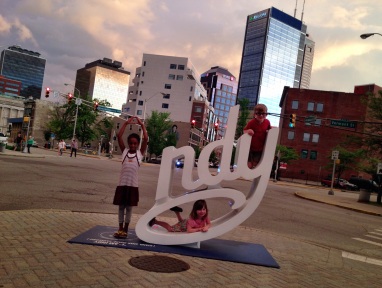 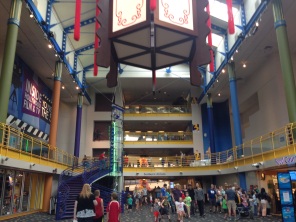 Blessings from above, the kids slept until about 10 this morning.  The poor dad of the family had to go to meetings at 8am, but the rest of us enjoyed a leisurely morning.

We received tickets to the Indianapolis Children’s Museum from colleagues of the dad, and since the weather forecast said hot and sticky on Monday but breezy and cool on Tuesday, we opted for the indoor activity today.

The Children’s Museum is spectacular and we easily spent five hours there in the Hot Wheels, Transformers, Science, and Hollywood exhibitions.  There was something for everyone in every room and the kids were entertained and excited everywhere we went. 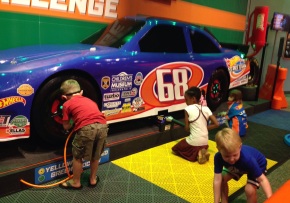 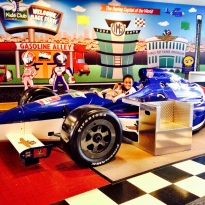 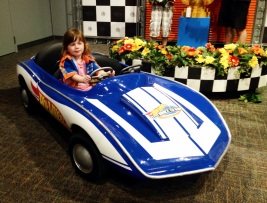 I was in absolute heaven when I walked around the corner into an exhibit called “The Power of Children Making a Difference,” and there saw one of my favorite Pioneer Girls, Ruby Bridges, along with displays about Anne Frank and Ryan White. 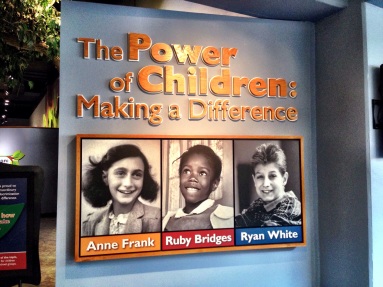 We revere Ruby in our family, her family’s courage in allowing her to be one of the first black children to attend a previously all-white school in New Orleans in 1960, Ruby’s own intelligence and education that allowed her to pass the unfair tests they put her to, her family’s faith that they were doing something bigger than themselves and that God would see them through it.  I really adore so many aspects of Ruby’s story. 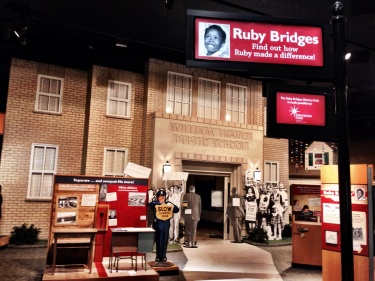 I walked into this exhibit that talked about her life and her experiences and I was overwhelmed.  I watched my own black daughter walk up to the doors of “William Frantz Public School” and listened as the “protesters” chanted, “Two, four, six, eight, we don’t want to integrate.”  I followed my girl through those doors and into a replicated classroom similar to the one where Ruby spent a whole year one-on-one with her teacher, longing to be with the other students. 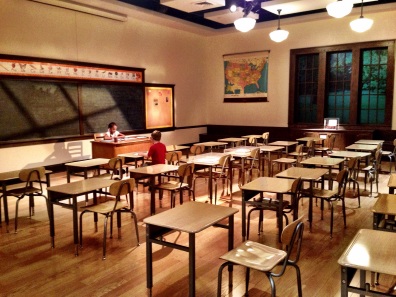 I saw Ruby’s lunchbox and read about how she skipped lunch every day for weeks after she heard other students in the lunchroom, thinking in her six-year-old mind that if she didn’t eat the lunch her Mama had packed for her, then maybe, just maybe, they would take her to the cafeteria and she could see the other children.  I learned that Ruby would never be able to eat the cafeteria food because there were threats of poisoning the brave 6-year-old little girl.

I ached when I read that the principal wanted to lower the grades that Mrs. Henry gave Ruby at the end of the year because she thought there was no way a black child should have such good grades, that it must be a result of the one-on-one attention she had received, as if that was Ruby’s choice, or Mrs. Henry’s.

I was relieved to see a display at the end encouraging kids to think about how they would react to Ruby if she came to their school today: suggestions like, “Welcome, Ruby,” “We are proud of you, Ruby,” “Sit with me, Ruby.”  There were encouragements to “be a change agent,” to reach out to people who might need you, to find similarities with others.  Recordings of interviews with a grown-up Ruby told the story of how she felt then and how she feels now, what she wishes people would know.  Ruby said, “Racism is a grown-up disease and we must stop using our children to spread it. 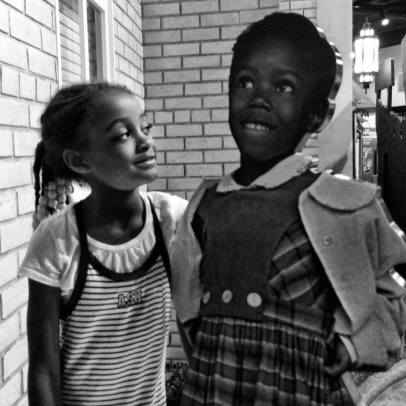 After closing the museum down at 5pm, we still had four hours of daylight to burn (thanks, Daylight Savings), so we went to pick out a prize from Target and then I took the kids to their favorite dinner at The Old Spaghetti Factory.  We ate in the trolley and had spaghetti and spumoni and all the people were happy.   After dinner there were still more hours of daylight to burn, so we went back to the little park with the big head and did cartwheels and somersaults and general energy-releasing until sunset and 10pm bedtime. 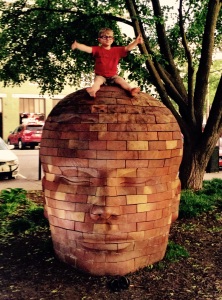 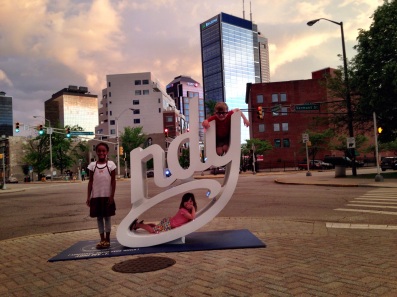 When we got back to the hotel, the dad introduced us to this work of art hanging in the lobby of our hotel. 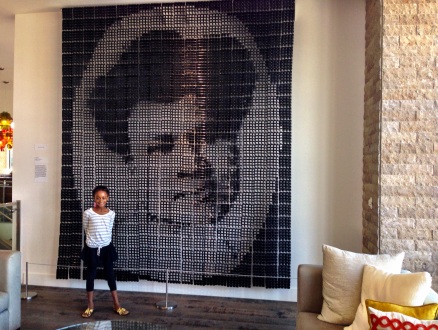 Madame C.J. Walker  was the first female self-made millionaire in the United States.  In 1867 she was the first child in her family born into freedom after the Emancipation Proclamation.  Widowed and left a single mother at only 20 years old, she moved from her home in Louisiana to St. Louis, where she was able to work as a washer woman.  She barely made a dollar a day, but she was determined to earn and save enough that her daughter could have a formal education.

Around 1904 she began selling hair care products for black women.  Eventually she moved to Denver and remarried, and with the help of her new husband developed and marketed her own Madam C.J. Walker beauty product line.  She became very successful and used her wealth and influence to advance the situations of black people in the communities around her.  She traveled all over the United States, mainly in the East and South, and in 1910 she moved to Indianapolis where she built a factory, hair salon, and beauty school.  She spent her life encouraging the development of charity and philanthropy in her employees, and setting the example of these qualities with her own life.

This sculpture was created by Sonya Clark from 3,840 combs and is displayed in the lobby of The Alexander Hotel in Indianapolis. 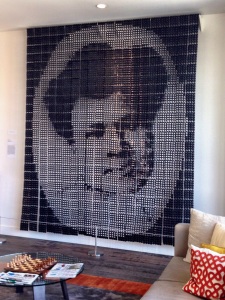 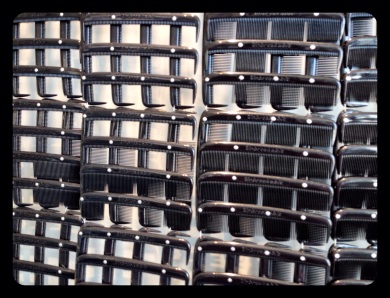 One thought on “Day Five #thirteenstates: Indianapolis (part one)”