We woke this morning around 9:30am in “Fancy Kansas.” We’re still rocking West Coast time, which means we travel late and wake up late, which is great for our purposes. Hotel blackout curtains are super helpful.

Once the car was packed up, we headed across state lines into Kansas City, Missouri, to Arthur Bryants Barbecue — for breakfast.

We opened the place up at 11am and beat the crowd (family motto),

including getting in before the busload of Kansas City Barbecue Tourists. It’s a real thing, and the tour guide wears a shirt with a pig on the back. I love the idea, but I don’t know how much barbecue I could eat in one day. Especially after pigging out at whatever the first stop was, I’m sure. But if you can pace yourself I’m sure it’s a delight.

After barbecue breakfast we went to Independence, Missouri, where the early Saints created a community of faith for about two years beginning in 1831, until the Missourians ran them out of the county and then the state for “disturbing the peace,” “treason,” and other unlikely offenses. The LDS visitors center there is lovely, with an imagination-play children’s area that kept us busy for a full hour. The people were only lulled away by the promise of an outdoor park and ice cream.

While the children were playing Pioneer in the basement of the visitors center, the dad of the family took a few quiet moments to go over to the Harry S. Truman Presidential Library a few blocks away. I kept the pioneers busy for him so I can’t talk about how great it was, but we’ll just say the presidential history-buff was impressed.

On our way to the park we stopped in to the temple of the Community of Christ. They have a small museum with artifcats from the lives of Joseph and Emma Smith, and the boy especially enjoyed testing the accoustics of their seashell-shaped sanctuary. 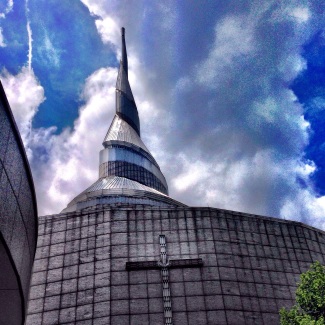 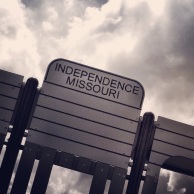 After snacks and a few minutes at the Independence park, we hit the road again bound for Liberty, Missouri. The Church has recreated Liberty Jail in a visitors center there, where Joseph Smith and his brother Hyrum and three other church leaders were falsely imprisoned for four torturous winter months in 1834-1835. Revelations recorded in Doctrine and Covenants Sections 121-123 were received there, and it was a life-altering experience for the prophet. Seeing a life-size representation of the conditions he and his followers lived in during that time was very moving.

While we were in the area I thought a lot about my own family from that era. Emma Higbee was born in 1836 near the Missouri River in Caldwell County, just to the north, and her family was forced to leave Missouri with the Saints two years later. She recounted the story of their crossing the river and going to Quincy, Illinois many times to her children and grandchildren. It was very interesting to be in these peaceful little towns, both of them with churches of every denomination on every other corner, and recall the frontier atmosphere and complete turmoil that her family lived in during those days. It would have been so very different from what we see here now, though the landscape I’m sure hasn’t changed much at all.

After Liberty we wanted to make one more stop, to see the Kansas City temple recently built by the Church. The grounds were lovely and peaceful, and it was reassuring to know that even after the history in this area, the gospel is thriving here and temple work is being done by faithful men and women.

After that peaceful moment it was time to leave the KCMO area and put down some more miles. We took I-70 east out of town, passing traffic for the afternoon’s Royals game, and crossed “the wide Missouri” a few times as we headed for St. Louis.

We stopped for the night in a suburb and let the kids burn some energy in the hotel pool before getting everyone to bed… at 11pm. Another busy day tomorrow!