Today we’re headed east on a tour of the middle of America!  We hope you’ll follow along over the next couple of weeks as we explore the history of the westward migration across the U.S. 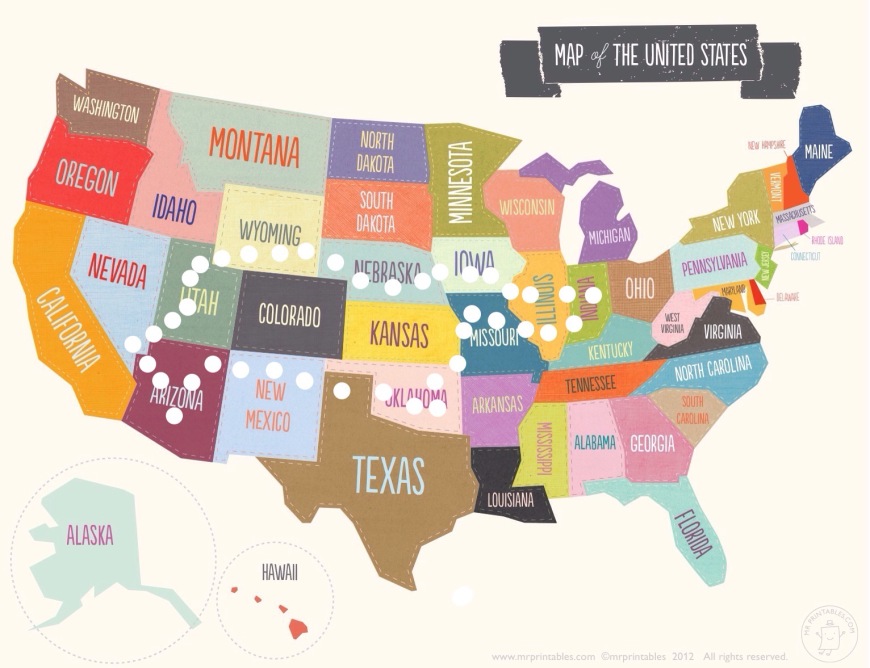 We’ll start with a quick drive east from Arizona.  Day one will take us from the Phoenix area up to Arizona’s Mogollon Rim and through the Navajo Nation along I-40, the old Route 66.  We’ll continue through northern New Mexico and make our first stop in Amarillo, Texas.  From there we’ll continue along the old Mother Road through Oklahoma City and up to Okmulgee and Muskogee, Oklahoma, where my father’s side of the family settled after the Trail of Tears.  We’ll stop in Tulsa (to eat at Chuy’s) before we cut quickly through Kansas and head up to Kansas City and Independence, Missouri.  We’ll finish the eastward leg of our journey going through St.Louis and southern Illinois before reaching Indianapolis, where we’ll stop for a few days.

The trip west will trace the Mormon Trail.  We’ll head first to Nauvoo, Illinois, where the Mormons built their “City Beautiful” on the banks of the Mississippi River.  Emma Higbee, the subject of the first Pioneer Girls book, spent her early childhood there and was baptized in the Mississippi River on her eighth birthday, and her mother and baby sister are buried there.  From Nauvoo we’ll proceed west across Iowa, covering in a few hours an area that took the early Mormons nearly four weeks to traverse with loaded wagons on muddy trails.  We’ll stop to rest where they did, near Omaha, Nebraska, at a place they called Winter Quarters.  One of Emma’s older sisters and a brother are buried there.

From Omaha we’ll continue west across country that hasn’t changed much since the initial westward expansion of the early 1800s.  Just as the pioneers did, we’ll see Chimney Rock and Scotts Bluff in Nebraska and Fort Laramie in Wyoming.  We’ll continue into Utah and enter the Salt Lake Valley through Emigration Canyon.  After a few days visiting family and friends in Utah, we’ll make our way back home.

One thought on “And we’re off!”